Lent 1: The Spirit in the wilderness 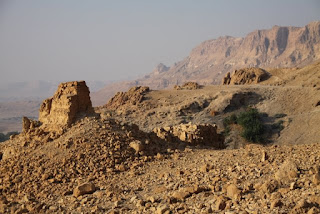 Then I asked the children to describe “their” desert for me. As always there were all sorts of answers. There were cacti and “that sort of bush that blows around “ – tumbleweed, I think they meant. One child told me how the sand was tickly under her feet. One had a pyramid in his desert. Another told me that his desert was completely black, no light, no stars. Some admitted to being a bit frightened, but then one girl said “I felt a bit lonely in my desert at first but then I remembered that I wasn’t alone after all.” “ So, who was with you?” I asked. “God was with me,” she said….
Out of the mouths of babes…

“In” or “into”. It seems like such a small thing but it makes a big difference to the meaning.  “Into” implies that the Spirit just took Jesus into the wilderness; after that he was on his own. But if he was led by the Spirit in the wilderness then the Spirit was with him the whole time, guiding him, strengthening him. That’s what Luke wants to emphasize. As that child at Seal School said, he wasn’t alone at all.

The Spirit is immensely important in Luke – he mentions it far more often than the other Gospel writers. Gabriel tells Mary that  ‘The Holy Spirit will come upon you” (21.39) when he announces that she will be the mother of the Messiah. The Spirit brings Simeon to the Temple to see the new-born Christ (2.27). The Spirit descends on Jesus at his baptism. (3.22). As he begins his ministry he quotes the prophet Isaiah - ‘The Spirit of the Lord is upon me, because he has anointed me, to bring good news to the poor. (4. 18) I could go on, but you get the picture. And in the second volume of Luke’s writings – the Acts of the Apostles – the Spirit has a starring role again, this time coming on the Disciples and driving them out across the world to spread the good news.

The Spirit is often the overlooked member of the Trinity, the one we are vaguest about, but in the Bible the Spirit is everywhere; at Creation, hovering over the waters of chaos to bring order out of them, inspiring the prophets, bringing them the word of God. The Spirit was the way the people of Israel talked about the real, immediate presence of God. The Spirit wasn’t a distant figure, enthroned in the heavens, but around them and within them, whether they were aware of it or not. “Where can I go from your spirit?  Or where can I flee from your presence?” says Psalm 139. The answer is, nowhere. The Spirit is with him always and everywhere.

So perhaps Luke is just stating something that he thought should be obvious. The Spirit doesn’t just lead Jesus  into the wilderness, but in the wilderness too, day by day through that 40 day long ordeal. Jesus is not alone, and he will never be alone in Luke’s Gospel, even as he hangs on the cross. His last word’s in Luke’s Gospel are “Father, into your hands I commend my spirit”, word of trust and faith. In Mark’s Gospel he cries out “my God, my God, why have you forsaken me?”, but there’s none of that sense of forsakenness in Luke. He knows God is there even at that most terrible moment, that second wilderness of pain and death, because he’d found him to be present long before in this first wilderness.

When Satan comes to him with all sorts of seductive suggestions, he’s ready to answer him because he knows God is with him.  He hears Satan’s words, slippery words which twist the Scriptures, taking them out of their context so they sound as if they mean things they don’t mean. But the Spirit’s voice within him is louder and clearer.

“Turn these stones into bread”, says Satan. After all, God had given people miraculous manna in the wilderness before. But Jesus knows that he needs to hunger and thirst for righteousness and wisdom, not a slap up meal.
“Exercise the power you’ve been given in my service”, says Satan. But Jesus knows that he has been given authority so that he can do his Father’s work, loving and serving others, not grabbing glory for himself.
“Do something spectacular to prove God loves you”, says Satan, but Jesus already knows that – he doesn’t need to put it to the test. He trusts that God will take him where he needs to go, and will be with him whatever happens.

We might say at this point, bully for Jesus – that’s great for him! He is filled with the Spirit, never alone. But what about us? How are we supposed to manage in our wildernesses? After all, Jesus is the Son of God, which gives him a bit of an unfair advantage over the rest of us. What are we supposed to do when we are in the desert, and feeling deserted?

If we are starting to feel disgruntled we need to look again at Luke’s Gospel, and especially at the words which come immediately before this story. Between the story of Jesus’ baptism and this story, Luke puts in a fascinating interlude. It is his account of the genealogy of Jesus. That might not sound very fascinating at first sight, but, trust me, it is. It starts from Jesus and works backwards. “[Jesus] was the son (as was thought) of Joseph, son of Heli, son of Matthat, son of Levi,” and so on and so on it goes, back through the generations, until we get to “Canain, son of Enos, son of Seth, son of Adam - son of God.” That’s what Luke writes. Jesus the Son of God is the descendant of Adam, who is also described as son of God.

Christians believe that Jesus is Son of God in some sense uniquely, of course – we’ve just been exploring that in the first session of our Lent course – but we also believe that every one of us is his son or daughter too.
God made Adam out of the dust, according to the book of Genesis, but it was only when he breathed his own breath into him that Adam became a living being.  The word for that life-giving breath was “ruach” in Hebrew, which can also be translated “spirit” – the words are interchangeable. We don’t have to take the Genesis story literally to understand what it is trying to tell us. God’s own breath, God’s own Spirit, is what filled Adam. Without it, he was just mud. According to the Bible, being fully alive, fully human, means being filled with God’s Spirit, having his presence deep within you, as close as the breath you take. That’s not just something that is true for Jesus, but for all of us, because we are all descended from Adam in the Bible’s view, like Jesus, children of Adam and therefore children of God.

Our life is given to us by God, says the Bible. All of us have his God-breathed Spirit within us, whether we acknowledge it or not. God's presence might be more obvious at some times, than at others. We might have  smothered the Spirit with our cares and worries, with the distractions of wealth, with all the other inner rubbish we accumulate. But the Spirit of God is stronger than our junk, calling us to breathe with God's breath, and allow God's life to be our heartbeat.

That’s why we keep this season of Lent. It is a chance to face our wildernesses, so that we can find  the Spirit of God leading us within them. In Lent, we give up some of the things we thought we couldn’t live without, so that we can discover God’s riches within us. We look for ways to love and serve others, to stretch our love and  compassion, and in the process discover that God’s love and compassion are inexhaustible. We carve out time for prayer, for discussion, for reflection, so that we can tune our ears to the voice of the Spirit and learn to tell the right pathways from the wrong in the trackless desert that life can often seem to be.

I began by talking about the wildernesses the children of Seal School imagined for themselves. They were all very different, but very real. I wonder what yours would be like if I asked you to describe it? I wonder how you feel as you imagine yourself standing in it?  It may be that your wilderness isn’t just a place you go to for Lent, but a place you have to live in long-term.  It may be a wilderness of chronic illness, or family problems or financial worries. But whatever our wilderness is like, and however it feels to be there, as I was reminded by that child this week, we aren’t alone. God is with us. The Spirit leads us in it, and if we know that we will know that we can never be truly lost, and our desert will never be a place in which we are deserted.
Amen
Posted by Anne at 11:58