Mothering Sunday: How many mothers?

How many mothers does a person need? When you are a child you may feel that one is more than enough. If you had loads of mums that would be loads of people to tell you to tuck your shirt in, wash your face, do your homework, tidy your room…

In the story we heard today from the Old Testament, though, it seems that the mothers you have the better it is.
Moses’ mother – his biological mother – has a terrible choice to make.
Pharaoh was on the rampage.He had ordered that all the baby boys born to the Hebrews should be thrown in the crocodile-infested Nile where they would either drown or be eaten. When Moses was born his mother's heart rose and sank in quick succession. Here was this child who she loved more than she could say, but he was a boy, and that meant he was in terrible danger.  At first she hid him, but you can’t hide a baby forever. He got too big to hide, so she knew she’d have to do something about it.

So she made a basket and put the baby in that in the water instead. I don’t know about you, but that doesn’t sound much safer to me. I would never have put my children in a basket in the water, not for a moment. Think of all the things that can go wrong with that. When I hear this story I can’t help thinking of those refugee mothers and fathers who make the choice to put their children in those fragile looking inflatable boats in Turkey and North Africa to make the perilous journey across the Mediterranean. You wouldn’t dream of doing it if you had any other choice. But Moses’ mother has no other option. She seems to be alone in all this. Where is Moses’ father? We don’t know. Maybe he is dead. Maybe he has been taken somewhere else. So she is just one mother, feeling very alone as she makes that basket.
http://www.theguardian.com/world/2015/sep/20/rescued-boat-refugees-turkey-threatened-deportation-to-syria
But fortunately she isn’t as alone as she thinks, and Moses will turn out to have many mothers, many people who give him a mother’s care.

The first is his big sister, who stays to watch over him, hidden in the reeds by the side of the water. She can’t do anything else, but she is determined to be there for him.

The second is Pharaoh’s daughter who hears him crying and does something about it. She knows full well that he is one of the children her own father has ordered to be killed, but that doesn’t stop her. She decides to save him anyway. And I am quite sure she knows what is going on when Moses’ sister steps out of the reeds and offers a convenient solution to who is going to breast feed this baby – there was no formula milk substitute then. But she goes along with it.

And then there are all her attendants, a whole group of women servants who are with her. Any one of them could have blown the whistle to Pharaoh, let him know that his daughter was planning on bringing one of the Hebrews right into the palace to bring up. But they don’t. So each one of them, in a sense, mothers this vulnerable baby.

In the other story we heard, just a snippet of the story of Jesus being crucified, Jesus creates a new, alternative family for his own mother and his best friend as they stand watching him die too. They can be family for each other.

Sometimes people say “it takes a village to raise a child”, and that’s true. All of us, whether our own mothers could care for us or not, are better off if a whole host of people are around to care for us. Parents can’t do it all for us. They don’t know everything. They can’t do everything. They aren’t superhuman.
That’s one reason why it’s important that we remember that it isn’t Mother’s Day today, it is Mothering Sunday.  It’s a day to remember and give thanks for all the mothering we get, and think about the mothering we can give.

Traditionally it was a time when people also remembered the mothering of the church – this is a community where we all try to care for one another and for those around us.
There’s an old tradition that some churches do of encircling the church on Mothering Sunday, holding hands, as if we are giving it a hug. I don’t know if it would be possible here – it would mean clambering about on the bank – perhaps we ought to try it. It is called Clipping the Church – Clipping is an old word for embracing.

Whoever we are, female, male, young, old, whether we have children of our own or not, we are mothers, able to care for others. And whoever we are, however strong and grown up and capable we are, we are children, needing the care of others, and it is a great and beautiful thing that we can give and receive love. 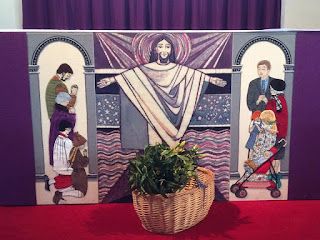 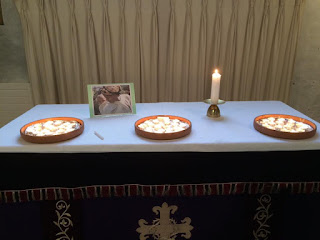 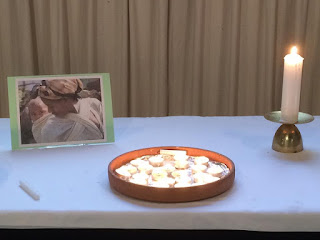