There are some things in life which are entirely predictable – somewhere in England today a newspaper will have a headline reading something like, “phew, what a scorcher!” The media can be equally predictable whenever Church leaders say anything about governments or financial institutions. If a bishop challenges injustice or corruption, someone will be quick to harrumph that “the Church should keep its nose out of business and politics”. Of course, Church leaders sometimes deserve criticism if their statements are naïve or hypocritical, but the idea that Christians should concentrate on the purely spiritual reflects a real misunderstanding of what faith is for and about. It’s also usually a sure sign that there’s something fishy going on which someone should ask hard questions about.

The truth is that anyone who thinks Christian faith can be divorced from the world of money and politics can’t have been reading the Bible. It’s full of challenges to injustice; this is its lifeblood.

Our first reading today is a case in point. 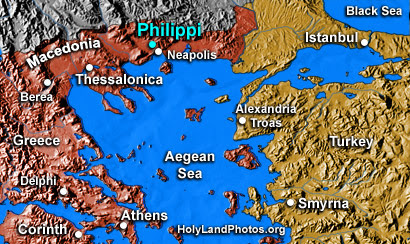 Paul and Silas are in Philippi, a Roman colony in Macedonia, which had been deliberately populated with Roman Army veterans, so it was a place where the power and wealth of Rome were very visible. Paul and Silas were there proclaiming the message of Christ, and they were having some success, but one of their keenest followers wasn’t entirely welcome at first. In fact she was quite a nuisance. She was a slave girl who is described as having a “spirit of divination”. She would probably be diagnosed as mentally ill today, but in the first century the kind of outbursts she was coming out with, the visions and messages she felt compelled to pass on, would have been attributed to spirit possession. This was a culture where people looked to all sorts of things to predict the future – the flight of birds, the condition of the internal organs of the animals they sacrificed. It gave them the illusion that they could control the chaotic world in which they lived. Fortune tellers like this girl were sought after, and this girl’s owners had obviously realised they had a real money spinner here. They were exploiting her mental illness for their own ends – that’s why they were so furious when Paul and Silas healed her. To them she wasn’t a human being, a person who was disturbed and deserved help; she was a unit of production, and Paul and Silas had put her out of action.

The slave owners complained to the authorities, who entirely agreed that this sort of thing must be stamped out. It was bad for business. Paul and Silas were flogged and thrown into prison, but in the middle of the night an earthquake struck, breaking open the doors. You’d expect the prisoners to make a run for it, and so did the jailer. He knew what would happen to him if they escaped. It wasn’t just his job but also his life that was on the line. The Romans had ways of making death extremely painful and humiliating when they wanted to make an example of someone, and he decided it was better to kill himself rather than wait for them to do it. Paul and Silas called out to him just in time, though. The prisoners were all still there. He had no need to fear. The jailer was so impressed by the fact that they even thought of his predicament that he was converted and baptised that very night. And when that had been done, Paul and Silas went back to their cells to wait for the law to take its course.

To his employers the jailer was a tool of the state, an instrument they could use to carry out their will, just as the slave girl was an economic tool to her owners. They were no more than cogs in the machinery of the world around them, to be used and abused, picked up and discarded at will. They had no rights, no status, no voice, no control over their own lives. Their worth was limited to the job they did, the money they brought in.  But Paul and Silas saw them differently, as people with their own feelings and opinions, their own God-given dignity, and it changed these people’s lives. Maybe it complicated them in some ways, but it seems like they felt it was worth it. Paul and Silas weren’t creating trouble for the sake of it when they interfered in the economic and political life of Philippi; they weren’t trying to build a rival empire for themselves either. They were just responding to human need, but they couldn’t do that without challenging the structures of power which had kept the slave girl and the jailer in their place.

It was the word “integrity” which came into my mind as I read these stories from Acts. Paul and Silas acted with integrity; they walked the talk. They followed the path they had to in order to live the message they were preaching, and they went where that path led them, no matter what it cost them.
Integrity is fundamental to the Gospel reading too.

Integrity is all about being one, being whole, holding things together rather than compartmentalising them. The slave-owners and rulers of Philippi compartmentalised their lives. They probably loved their children and were kind to their friends; they put them in one compartment. But they thought of other people – slaves, jailers - as disposable, not really human at all; they were in another compartment entirely, a compartment for things that didn’t matter, people for whom you didn’t have to have empathy. If they’d stopped to think about what it was like to be that slave girl, or that jailer, if they had imagined their daughter or their friend in that position, they couldn’t have treated them the way they did.

There’s a name for this process of distancing yourself from groups you don’t want to think about. It’s called  “othering”. There’s us. We matter. Our joys and our sorrows are real. Then there are the “others”; people we don’t want to think about. We convince ourselves that they don’t feel the way we do. When they are beaten or starved they don’t hurt like we would. Their suffering doesn’t count.  “Othering” is what the Nazis did to the people they annihilated in the concentration camps; Jews, Gypsies, gay people, the disabled; they were all “other” to their Nazi overlords, so what happened to them didn’t matter. Today we still do this to people ; Muslims – well, they’re all terrorists, or might be, so why should they expect any rights?  The poor? They’re just feckless; we would find work, save, organise ourselves better, if we were in their shoes.  We “other” the people who produce the cheap goods we buy too. We prefer not to think about the pressures they are under, the short cuts their employers make to offer such a good deal, the risks they are exposed to. We wouldn’t tolerate their working conditions, but we convince ourselves that they don’t really mind the way we would.

Living with integrity, though, is the opposite of “othering”. It means seeing our shared humanity rather than our differences, taking on board that every person is a person like us. It means allowing ourselves to feel empathy for people, to love them as we love ourselves.  It is fundamental to the Christian Gospel, which proclaims that everyone is a child of God and that we’re all held together in God’s love.

In the Gospel reading, Jesus prays that his followers will be one, as he is one. It’s a reading full of oneness, which is just another word for integrity. “As you, Father, are in me and I am in you, may they also be in us, … The glory that you have given me I have given them, so that they may be one, as we are one, I in them and you in me, that they may become completely one.” If all that sounds rather tangled, that’s because it’s meant to. We are meant to be tangled up with God and one another. If we are serious about our faith we can’t compartmentalise it. We can’t put it in a box marked “spiritual”, to be opened for an hour on Sundays and then firmly locked up for the rest of the week. If it is real at all it will eventually invade every part of us, shaping the way we think about ourselves, the way we think about others, the way we do our jobs, the way we treat our families, the way we make political and economic decisions. God is one, and in him everything else is one as well.

The integrity Jesus wants for his followers - the oneness he’s praying for here - isn’t just a superficial matter of being nice to each other. It is the kind of integrity that holds everything together; the bits of ourselves we like, and the bits we don’t, the people we choose as friends and those we are tempted to discount and push away, the material and the spiritual, prayer and money, worship and politics . It’s the kind of integrity that holds our beliefs and our actions together. If we believe that all people are made in the image of God , how can we ignore the way poverty and oppression mar that image? If we believe that God calls everyone and gives them a unique role, how can we ignore the injustices which rob people of the power to control their own lives and speak with their own voice?

Should Christians stick their noses into politics and economics? Of course they should, and not just their noses but the whole of the rest of themselves too. In fact, whether we like it or not, we are already thoroughly mixed up in these things, shaping the world and being shaped by it. Our challenge and our privilege is to make sure that is a process which leads to life, dignity and hope for all. The only way to do that is to live with integrity, as Jesus has called us to, as people who are one with ourselves, one with each other, one with those who are discounted and oppressed, and one with God who holds all things in heaven and earth in one embrace.
Amen.
Posted by Anne at 11:50