Epiphany Sunday: God in the mess

Today we celebrate the feast of the Epiphany. It’s an ancient feast, going back into the early centuries of the Church, and it was the main celebration of Christmas at first, as it still is in some parts of the world. It was especially popular once Christianity became the imperial faith of Rome and then the faith of kings and emperors across Europe in the Middle Ages. It’s easy to see why when you look at how the story has been presented in paint, mosaic and stone over the years. The Magi were pictured as exotic visitors from the East. Their feast was the ideal opportunity for a bit of bling, for fine fabrics, rich colours, shiny gold and silver and precious stones. They were much more appealing to royal courts than a bunch of drab looking shepherds in homespun clothes.

Medieval kings were fond of staging re-enactments of the Epiphany story as part of their court celebrations, and you can guess who got to play the part of the Magi – they did! They weren't letting anyone else hog the limelight and the best costumes. The story of the Magi was used to legitimise their power and wealth. If they had been welcome at the crib, so would any powerful, wealthy person. That’s true, of course, but they didn't stop to ask whether it mattered how you came by your wealth and power, or what you did with it. Medieval kings shoehorned themselves into the picture, no matter how much they had to distort it in the process. That’s why these Magi gradually became thought of as kings, despite the fact that Matthew doesn't call them that at all, or even hint that they might have been. The only king in Matthew’s story was the murderous king Herod, but no one who valued their lives was going to point that out to a Medieval monarch.

But if these visitors weren’t kings, who were they? There’s a lot of debate about that. In the ancient world, a Magus – that’s the singular – could be any of a large range of people. Originally, they seem to have been priests of the Zoroastrian faith, from Persia, but by the time of Jesus, the word could be used for anyone who practiced what were seen as magical arts – magic comes from Magi. Some Magi observed the natural world – the stars and planets – looking for divine messages in them, and gave birth unwittingly to what we now call science. Others were philosophers or gurus, claiming some special secret knowledge which they would share with their devotees. Some were no more than snake-oil salesmen, con artists, people looking to exert power and gain wealth by trickery.

These visitors to the infant Christ obviously had an interest in astronomy – they spotted the star - but we don’t know much more about them than that. They were rich enough to afford costly gifts, but it might be that the gold, frankincense and myrrh they brought was all the wealth they had. They certainly weren't the kings that later history turned them into, and they weren't even necessarily the “wise men” our modern translations tend to call them. After all, going straight to the reigning king to tell him that he had a rival in the shape of a vulnerable baby was hardly a sensible move. So all we can really say is that these Magi were from far away, Gentiles not Jews, and that they were seekers. They were people who knew that there was more to know, people who knew that they needed something, and that they needed it enough to trek a long distance and give gifts of great value to find it. They didn’t know where they were going, or what they were going to do when they got there, or what difference it would make; they just knew they had to make the journey.

Their story is really a long way from the gilded, shiny tale those Medieval monarchs wanted it to be. It’s a story of confusion and terror, a story with a bloodbath at its end, as King Herod tries to obliterate the competition for his throne. The Holy Family become refugees in Egypt as a result.
The whole thing is, in short, a bit of a mess.
And yet it proclaims that in the midst of that mess, God is present. He’s present for people who don’t know what they are doing or why they are doing it, for people who get it spectacularly wrong. He’s present in the midst of bloodshed and grief, in the face of hatred and jealousy. He’s present for those who don’t fit in, for those who come from far away and feel like clueless outsiders. He’s present for those who live in “thick darkness” as the prophet Isaiah put it in our first reading. He’s present for people who are in a mess, people who have made a mess. And that, surely, means he’s present for us, because somewhere in that messy list, we can all find ourselves, if not now then at some point in our life. So this story is very good news, not just for kings and emperors, but for everyone.

Mess has been a bit of a theme for me this week. As you may know, on Wednesday morning I discovered that the church hall had been broken into and vandalised. Broken crockery everywhere, broken windows, and a plate of spaghetti hoops thrown at the kitchen wall. The perpetrators had obviously had a field day, high on something or other. Fortunately, a team of people swiftly rallied round and cleared up, and Martin got the insurance claim underway and sorted out the glass repairs. Mercifully too, the newly refurbished kitchen hadn't been damaged, apart from the aforementioned spaghetti hoops. So it could have been worse. But it was no fun discovering this scene of devastation on Wednesday morning, and of course, although the insurance will cover the damage there’s the excess to pay and the nuisance of sorting it all out. 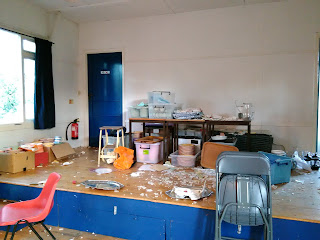 It wasn't just the physical mess that struck me as I surveyed the wreckage though. That was fairly easy to deal with. It was the other mess which really saddened me, the mess of the lives of those who had done it. What kind of state do you have to be in, how hopeless and purposeless do you have to be to create such wanton destruction? What does the future hold for you if you’re that far out of control, so disengaged from your own community that you can trash a space that’s there for you too? How far awry does your moral and emotional compass have to be for you to do things like this?

It’s easy for us to feel angry about the damage done to the church hall, but I believe God wants us to be just as angry about the damage that must have been done to the lives of his children to turn them into mindless vandals who are capable of this.  That doesn't mean the law should be soft on them if they’re caught, but it matters that we understand that God is just as much with them and for them as he is for us. He longs for them to see the starlight that’ll lead them home to him, just as much as he longed for the Magi to see it. He longs for them to find meaning and purpose for their lives, to know they’re welcome, as the Magi were – you don’t have to break in if you know you’re welcome!

This story of the Magi is for them, but of course, it is also for the rest of us too. Most of us probably wouldn't smash up other people’s property or throw plates of spaghetti hoops at the wall, but we’re all capable of making a mess of life – our own and others, deliberately or accidentally. We can vandalise people’s spirits by putting them down, smashing their confidence, disregarding or condemning them. That can cause damage that is far harder to put right. We can all find ourselves stumbling about in the “thick darkness” Isaiah talked about, directionless, lost, causing mayhem as we go. We all need that star to call us home.

The Magi weren't really the shining heroes those Medieval kings wanted them to be. They were just people who knew their need of God, and were desperate enough to make a messy, costly journey to try to find him. When they did, it wasn't in the political and economic heart of the nation – King Herod’s palace. It was at the heart of an ordinary family who had an extraordinary willingness to welcome those God sent to them, whoever they were and wherever they’d come from, even if it threw their own lives into turmoil. That’s exactly how the adult Jesus behaved – this foreshadows his adult life. He allowed his life to be messed up so that others could find the love of God.  The Magi go home, we’re told, “by another road”. That’s not just a geographical detail; it is a spiritual one too. They’ve been changed by the journey, and the welcome at the journey’s end.

There’s an old Epiphany tradition in which priests bless small pieces of chalk.  The chalk is then taken home and used to write a message above the doors of those who receive it. The message reads, rather cryptically, 20 + C + M + B + 17. The 20 and the 17 are the year, of course. The C,M and B are either Caspar, Melchior and Balthasar – traditional names given to the magi in Western Christianity – or alternatively they stand for “Christus Mansionem Benedicat” – Christ bless this house. Altogether it is a sign to anyone who sees it that this is a house committed to giving a Christian welcome to those who are looking for it, wandering Magi, the questioning and confused, and  to Christ himself, who comes to us in everyone we meet. 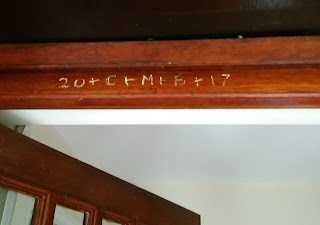 I have some chalk this year, which I’ll bless later in the service. If you’d like to you are welcome to take a piece home and to write that sign over your door. If you live somewhere you can’t really chalk, I've made some little signs which you might be able to fasten to the door, or put in a window instead.

Like those Medieval kings, we all like a bit of bling in our lives, but in the end, the light of God’s love, known in the love we give and receive, and in the welcome we extend to others, is far brighter and more glorious than earthly gold, far sweeter than frankincense, far better for healing than myrrh. May that light shine in our hearts today.

The Blessing of the Chalk
Welcoming God, who led the Magi to their true home in the heart of Christ by the light of a star, bless this chalk today. May the signs of welcome we make with it be matched by the welcome we give in our hearts; to the wandering and confused, to the lonely and the lost, to those who seek for you, and those who do not know what they seek. May they find you in us and may we find you in them. In the name of Christ. Amen
Posted by Anne at 13:17