Visions of the Nativity 1

The birth of Christ has to be one of the most common images in the Western world. It’s everywhere, especially at this time of year, and we instantly recognise it, no matter how the details might vary. If you study pictures of the nativity story, though, you soon start to recognise that they tend to fall into a number of  broad groups each of which brings out a different aspect of the story. I have chosen just three of these ways of painting the nativity to reflect on in our Breathing Space services this Advent - there are more of course, but we only have three services – and I’m going to illustrate each of them with one typical example of that sort of picture.

This week and next week, as it happens, the types of pictures I’ve chosen to focus on both have their origins in the visions of a medieval nun, called St Bridget of Sweden. She was born around 1300 AD, and was married off to a Swedish nobleman at an early age. She bore him eight children, but when he died she was able finally to follow her calling and enter a convent. Eventually she founded her own order, now called the Brigittines after her. St Bridget was very famous in the Middle Ages. Her visions were part of popular spirituality for hundreds of years – everyone knew them – and because of this, they gradually came to shape the way artists portrayed this story, as they still do, even if most people now have never heard of Bridget at all.

In her vision, she saw Mary come into the stable with Joseph, who went outside to leave her to have her baby in private. According to Bridget, unlike most of us when we are in the final stages of labour, Mary then knelt down in prayer. Perhaps more of us should try it, because apparently all in a moment, hey presto, just like that, the child was born! Bridget went on like this. “I saw the glorious infant lying on the ground” she said, “naked and shining…Then I heard also the singing of the angels, which was of miraculous sweetness and great beauty...” She’d had eight children, remember, so you’d think she would know this was all a little unlikely, but this is what she saw, and it soon passed into the popular imagination of this scene. 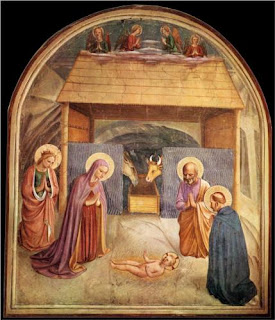 That’s why, when Fra Angelico came to paint the nativity fresco which I have given you tonight, he shows the child just lying on the floor. Many other artists of the time painted it like that too. To us it is an image that can seem quite odd, disturbing even. Who would leave a baby like that, just lying on the ground? The mother in me, the human being in me, wants to rush in there and pick him up, wrap him up and keep him warm…

In fact, if we read on in Bridget’s vision we find that that’s what Mary does next. She takes him in her arms and puts him in the manger. But what Fra Angelico is painting is that very first moment after Jesus is born, even if Mary doesn’t look to us anything like a woman who has just given birth.  It is actually the equivalent of that moment we might see in a documentary film of a modern birth when the new-born baby, naked and wet, is handed squirming to its mother – that very first meeting - a moment of delight but also a moment when you become aware of just how vulnerable your child is. For nine months they have been protected by their mother’s body, provided with everything they need to survive. But now they are subject to the vagaries of the world, the whims of those around them who might or might not hear their cries, who might or might not feed them when they are hungry, who might or might not pay them the attention they need to survive.

In the Old Testament account of creation Adam is literally made out of earth, shaped from the mud by God. That ancient image might seem strange, but it is oddly accurate. We are all made out of the physical stuff of the world, and we depend on it utterly for our survival. That can be great – the world is a wonderful place, full of riches and beauty, but it can also be terrifying, full of dangers and hardships. In coming among us as a human child God allows himself to become dependent on the earth too, absolutely part of it, with all its joys and limitations. ‘Are you the one who is to come, or are we to wait for another?’ asks John the Baptist in our Gospel reading, and who can blame him? He can’t believe God has really turned up in his own backyard, his own earthy reality? But it is so. “The blind receive their sight, the lame walk, the lepers are cleansed, the deaf hear, the dead are raised, the poor have good news brought to them.”

Bridget’s vision of the birth of Christ might be like no other birth the world has ever seen in terms of its speed and painlessness, but the child who is born is every bit as vulnerable as we all are as he lies on the earth he’s become part of. Sometimes that earth will seem cold and hard to him, as it does to so many who are born into poverty and trouble today. If this picture makes us feel like rushing in and picking him up, perhaps that is all to the good. Maybe we might find in that the prompting of God to pick up the children of today who lie on the cold earth of our world and need our protection and love.
Amen