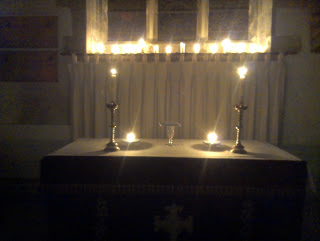 This is the third and last of our Advent series of reflections on the theme of Coming to Rest. In the first, we thought about our need to come to rest in God amidst the busyness of preparing for Christmas. Last week we thought about the way in which we come to rest when we hit rock bottom, yet find we have landed in the hands of God. Tonight, though, we change our focus. Tonight it isn’t we who are coming to rest, but God himself. God who, in Christ, lets himself fall from the glory of heaven into the ordinariness and the squalor of the world, into its confusions and cruelties, into our limited, painful mortality.

This is the God who “emptied himself,” according to Paul’s letter to the Philippians, who didn’t just take the form of a human being, but took the form of a slave. And even that wasn’t the lowest point of his journey. He “humbled himself and became obedient to the point of death – even death on a cross.”

This downward pattern is there in the Gospel reading too. It starts with the Emperor Augustus and his decree that all the world should be registered. We don’t know whether this decree actually was made – there’s no independent record of it – but Luke’s point is that the story begins at the top of the tree of power in the ancient world. The Emperor Augustus is about as grand as it can get. But this story, it turns out, isn’t about him.

So next we lower our sights a bit. We are introduced to Quirinius, Governor of Syria, the Roman province which included what we would now call Israel. But the story’s not about him either.

It’s not till the end of the passage that we discover who the main character really is: a new-born baby, indistinguishable from any other. Even then, though, we haven’t stopped our downward descent. This child is born to a woman who has conceived him when she was not married; something that would have raised eyebrows at the very least, though Joseph seems to be behaving as if he accepts this child as his own. And the baby isn’t born in the comfort of a guest room or a lodging house, but has to lie in an animals feeding trough.

Biblical scholars argue about  precisely what Luke is describing here. It might be the space in an ordinary house shared with the animals. It might be a feeding trough out in the open. But the meaning is clear. This is about as low as it gets. A helpless baby, who seems to have all the cards stacked against him. But this is where God chooses to come into the world. This is where he comes to rest; first in the womb of an ordinary, probably teenaged, girl around whom there is more than a scent of scandal, then in a manger, rough and probably none too clean.

It is about as unlikely a place as you can imagine for the king of heaven to be, yet this is the point. God comes to rest in unlikely places and unlikely people.

It’s a theme which Luke introduces here in his birth stories because it will give us a foretaste of what is to come in the rest of his Gospel. Jesus will be God’s presence in unlikely places throughout his life; among prostitutes and tax collectors, women and children, the sick and the outcast, the last places people would expect to find God. Ultimately, he will be God’s presence on the cross, and in the tomb. He will be God’s presence in these places, transforming them from places of squalor, failure and death, into holy places, places where forgiveness can be found new life can begin.

And it is still true today. The promise of the Bible is that in Christ, God comes to rest in our lives. My guess is that most of us would feel we were very unlikely places for that to happen, but that's how it is. And he doesn’t just come to rest in the sense of coming to a full stop in us, lying there inert and passive; in fact it is quite the opposite. He comes bringing rest, the rest which is wrapped up in the Hebrew word shalom, the rest which God enjoyed on the seventh day of creation.

Shalom is about far more than simply stopping work, though. Shalom is the state where all is as it should be, when wrongs are set right and all that was broken is healed. It is the peace that passes understanding, but which, when we have it we can’t mistake it for anything else. It is peace, true rest, which we can carry within us, even when the outward circumstances of our lives are troubled - a still, calm centre that can hold us through the storms of life.

So in the silence tonight, let’s picture our hearts as that strawy manger where Christ is laid, the place where – unlikely as it seems – he is perfectly at home , coming to rest in us and coming to bring rest to us.
Amen