Lovely, peaceful, Advent Breathing space tonight. The address - the first of three - is below. Join us on the next two Thursday evenings (15th and 22nd) at 8pm for a chance to catch your breath and reflect amidst the hubbub of the run up to Christmas. 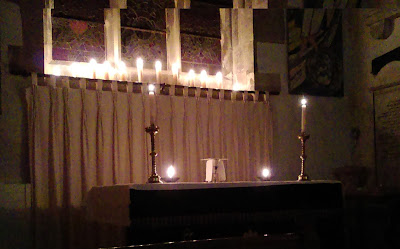 One Word
Hebrews 1.1-3
Long ago God spoke to our ancestors in many and various ways by the prophets, but in these last days he has spoken to us by a Son, whom he appointed heir of all things, through whom he also created the worlds. He is the reflection of God’s glory and the exact imprint of God’s very being, and he sustains all things by his powerful word.

John 1. 1-14
In the beginning was the Word, and the Word was with God, and the Word was God. He was in the beginning with God. All things came into being through him, and without him not one thing came into being. What has come into being in him was life, and the life was the light of all people. The light shines in the darkness, and the darkness did not overcome it. He was in the world, and the world came into being through him; yet the world did not know him. He came to what was his own, and his own people did not accept him. But to all who received him, who believed in his name, he gave power to become children of God, who were born, not of blood or of the will of the flesh or of the will of man, but of God.
And the Word became flesh and lived among us, and we have seen his glory, the glory as of a father’s only son, full of grace and truth.

If you are following our Advent series of daily reflections, online or in the printed booklet, you will know that this year’s Advent theme is “One Word”. Each day there is one word to think about, a word linked to the Advent and Christmas stories in some way. It just seemed to me that at this time of year there is so much noise, so much chatter – advertisers shouting at us, demands and requests coming at us, background music everywhere, busy parties and family gatherings with everyone speaking over everyone else - and I just wanted to stay “stop!”. Let’s be quiet and give some space for the words that really matter to sink in. So, each day, there’s just one word, with some questions to prompt our thoughts – “expect”, “silence”, “hope”, “child”, “danger”, “peace”, “fear”, “manger” – these are the words we’ve had so far.

But in a sense they can all be summed up in the One Word who is at the heart of the story, that baby born in Bethlehem, the Word of God.

It’s no accident that John’s Gospel describes him like that - as a word. Words are one of the most important ways in which we express ourselves, explain ourselves, share our thoughts and feelings. They are the way we pass on wisdom.  The same is true for God.

The Bible pictures God as an avid communicator, someone who wants to get his message across. The Bible begins with him speaking into the darkness and chaos “Let there be light”- and there is light. God speaks creation into being. His words make something happen.

These sort of words are known technically as “performative utterances” – words that change things. Marriage vows are performative utterances. They are what tie couples together, not the signing of the registers in English law. Words can change us in other ways too. We never forget words from childhood which build us up, or tear us down.  Words matter.

God’s words matter most of all. It’s not just physical creation which they call into being. They can make a new creation in us too.  “ I have loved you with an everlasting love,”   he says through the prophet Jeremiah  ( 31.3) “I have called you by name, you are mine.”  - that’s Isaiah (43.1) How different would we be if we really let those words sink in?

But, for Christians, the supreme way in which God speaks to us is in the Word made flesh – Jesus himself. For those who met him in his earthly life, Jesus seemed to sum up God, to express what he was about in a way they couldn’t miss. You didn’t need to read him in a book.  Through his life, his death, his resurrection, in the whole of his humanity, with all the complexities of any human life, he said “God”, to them. The letter to the Hebrews says that in him, God spoke to us “by a son” - “sonwise” , as the old translations put it.

Why did that matter? Perhaps because, great though words are, they can never be a substitute for a flesh and blood encounter.   I often have to try to sum up a person at a funeral, maybe someone I have never met, and I am always well aware of the impossibility of such a task. Even if I get all the facts right, and even capture something of their spirit of the person, I know that to those who are listening there will be a whole world of complexity in their own memories which I can never capture, a richness which can never be pinned down. They will have been different things to different people at different times.

It was the same with Jesus. It was the whole encounter people had with him that spoke to them; not just his words , but his presence, his touch, his gaze, his attention to them. To some he communicated God’s challenge, or God’s call; others heard encouragement, gentleness, acceptance.  And though today we can’t physically take his work-roughened hands in ours, or look into his eyes, God’s promise is that, through the Spirit, he is with us, part of our lives, if we will let him be.

So through this Advent series, in these services at least, let’s slow down, silence the clamour that fills our life, so that we can hear what the One Word of God is saying to us. In the next two sessions we’ll think a bit more about speaking and listening –how God speaks and listens to us, and how we might speak and listen to him, to ourselves, to others – but I’ve said enough words for tonight.

We’re going to spend a few minutes in silence now, as we always do at our Breathing Space services. As we do, we ask that the Word of God will speak to us. It may be just a faint whisper; it may be may be a clarion call, loud and clear.  What is the Word of God saying to you tonight?
Amen